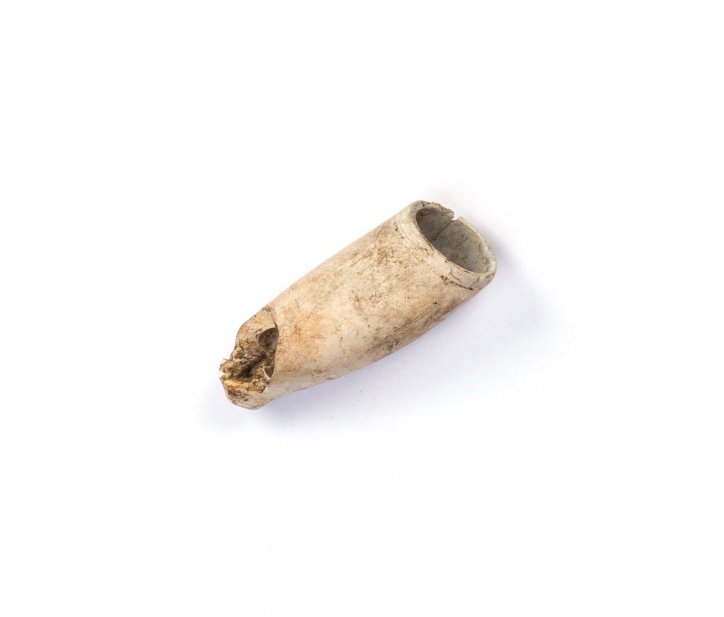 This is a classic mud lark find – the stems of these press-moulded ceramic tobacco pipes are everywhere on this site and must have been as ubiquitous as fag butts are now. Clay is a great medium for mass-reproduction of hollow forms and fancy surface design, with the added advantage of remaining intact in the earth over the years.

The bowl shapes were probably copied from pipes made by Native American peoples, who first domesticated tobacco plants, and smoked and shared pipes both ceremonially and socially. Tobacco was exported across the world, and the new pipe technology meant that the nicotine hit was instant. It quickly became an accessory that enabled creative or status expression. This one is knobbly, like an American beaded pipe. Working people preferred a short stem, which could be gripped between the teeth on the job. Skulls have been found from the era with pipe-stem shaped holes where the teeth meet.

I’m imagining people smoking together in the old churchyard of St Jude’s which once stood on the Phytology site, built in the 1880s. Ceramic pipes were commonly made up to 1914, when hardwood pipes and cigarettes took over, so this pipe must come from before the church was destroyed, in 1942.

Or perhaps this pipe was used by kids – blowing soap bubbles. Either way it was made by hand and belonged to someone – an intimate object, pressed, trimmed, packed and fired, well-thumbed, puffed and chewed by its owner before being broken, buried, bombed, dug up by foxes and finally exhibited by me, the mud lark.

BackToTop
Design + build by Modern Activity Built with GRAV, many thanks to Trilby Media, special thanks for scaling script by hackberry.biz Terms of Service & Privacy Policy